Over 120 people gathered at John Curtin Art Gallery last weekend for the Truth Telling and Taking Action symposium about the current situation for asylum seekers in Australia.  It was hosted by a group of service providers, advocates and the Centre for Human Rights Education at Curtin University.

It was a day of storytelling.

Asylum seekers, on many different types of visas, told of their daily lives and how challenging living on these different temporary visas can be. My overwhelming sense was one of uncertainty and worry.  People wake up every day and wonder whether they will be called in to discuss their visa and if they are safe.

The Refugee Council of Australia will be spearheading a major campaign from Thursday 14 March leading up to the Federal election called I Choose to be Humane – treat people like people.  All the presenters described how there is a real opportunity to be heard and make a difference in the next few months.  You’ll be able to access the campaign at www.choosehumane.org.au so register your interest now.

Easy-to-read facts and information are also available from the Refugee Council website.  This is one thing we can all do – be more informed about the debate and people’s lives.

Here’s the definition of some common visa types that might be helpful in understanding this issue.

Bridging visa (BV): Temporary visa granted to allow someone to live in the community while they wait for their refugee claim to be finalised.

Safe Haven Enterprise Visa (SHEV):  Five-year temporary protection visa that can be granted to someone who came by boast and is found to be a refugee.  At the end of five years, they may be eligible to apply for a permanent visa if they meet that visa’s requirements, but only if they have worked or studied in a designated regional area for at least 3.5 years.

The symposium coincided with Refuge, a Perth Festival exhibition which runs until mid-April, featuring two poignant and timely works – Candice Breitz’s Love Story and Angelica Mesiti’s Mother Tongue. They both utilise cinema and art to present the complex experiences of their immigrant and refugee subjects through music, performance and the spoken word. 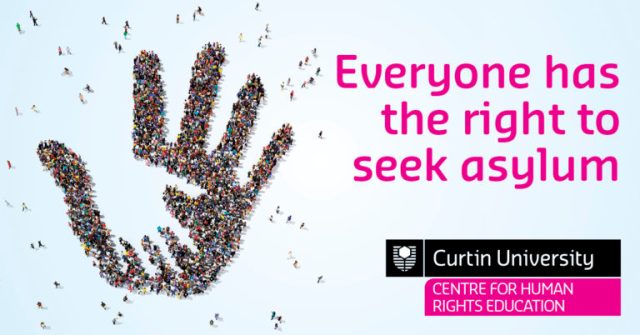