Diverse voices matter in Australia more than ever. Ways of being here is pocket book-sized collection of four short stories that showcases the work of four t 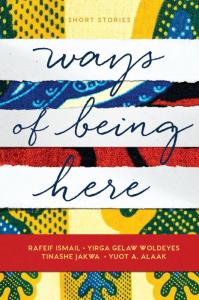 Maxine Beneba Clarke writes in her introduction: “Black people of African descent – black diaspora settlers and migrants and descendants of such – have been living in Australia for over 200 years. Yet local African diaspora fiction has been markedly absent from Australian shelves”.

Ways of being here is a terrific read. You can read it slowly, dipping into it over time, or in a few hours on an afternoon or evening you might have free. Either way, I guarantee you will want to read it several times. These beautifully written stories will capture your imagination and your attention. The four write of love, loss, the challenge of living between cultures, intergenerational clashes, of being made welcome and of being isolated.

Rafeif Ismail’s moving story, ‘Light at the end’, about two young women has language that sings off the page with emotion.   He writes: “When did you become this desperate, desolate thing? When did the world’s colours dull and laughter have a price? Fear is the chain you wear, shackling you between walls of loneliness, shame, regret and, most terribly, hope.”

Yirga Gelaw Woldeyes story, ‘When the sky looks like the belly of a donkey’, tackles the cultural challenges of starting a new life in Australia – a place so different from your home country. Yirga also captures what could be a group of typical Aussie blokes with insightful writing. The story about Ermi, usually mis-pronounced by many of his workmates as Army, is one I have heard from many migrants and people of refugee background. It is about starting at the bottom of the ladder, trying to fit in and always missing the people left behind. I laughed and I cringed but by the end of the story I smiled with hope.

All four short stories provide a valuable opportunity to reflect about the lives of others.

Ways of being here is published by Margaret River Press and the Centre for Stories, 2017